Today I am thrilled to bring you my review of Real Men Knit by Kwana Jackson.

I was highly anticipating this book for SO long, and I was not disappointed! 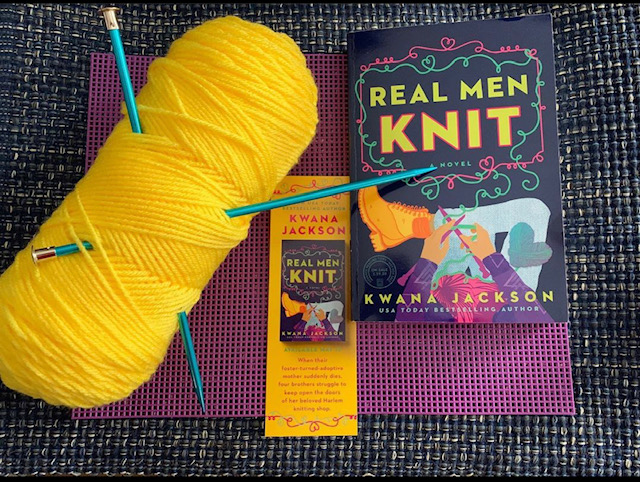 When their foster-turned-adoptive mother suddenly dies, four brothers struggle to keep open the doors of her beloved Harlem knitting shop.

Jesse Strong is known for two things: his devotion to his adoptive mom, Mama Joy, and his reputation for breaking hearts. When Mama Joy unexpectedly passes away, he and his brothers have different plans for what to do with Strong Knits, their neighborhood knitting store. Jesse wants to keep the store open. His brothers want to tie off loose ends and close shop….

Part-time shop employee Kerry Fuller has kept her crush on Jesse a secret. When she overhears his impassioned plea to his brothers to keep the knitting shop open, she volunteers to help. Unlike Jesse, Kerry knows the “knitty-gritty” of the business, and together they make plans to reinvent Strong Knits for a new generation.

But the more time they spend together, the stronger the chemistry builds between them. Kerry, knowing Jesse’s history, doesn’t believe their relationship can last longer than she can knit one, purl two. But Jesse is determined to prove to her that he can be the man for her forever and always. After all, real men knit.

Real Men Knit is a MUST READ!!!!! The author once again blows me away with her writing of family dynamics and closely woven (pun intended LOL) communities.

The story revolves around a shop in Harlem, perfectly named Strong Knits. The matriarch, Mama Joy had adopted four boys . Mama Joy has recently passed away leaving the future of the story in jeopardy.

The story is written from two alternating perspectives, one of which is Kerry, who has been a worker and staple in the store for a very long time. Kerry has had a thing for Jesse one of the brothers since forever. The other perspective is written from Jesse. I loved that I was able to read both of these characters.

The romance of Jesse and Kerry gave me ALL THE FEELS !!!!

Jesse and Kerry band together to try and save the store.

The characters were complex, complicated and well fleshed out. I loved reading about the strong brothers and their love for each other and Mama Joy.

The inclusion of social media as a marketing tool was fun, timely and relevant.

I was not only rooting for the family, the romance, but also the store.

This story is a well written emotional, funny romance that I highly recommend.

A USA Today bestselling author, native New Yorker, Kwana Jackson aka K.M. Jackson author spent her formative years on the ‘A’ train where she had two dreams: 1) to be a fashion designer and 2) to be a writer. After spending over ten years designing women’s sportswear for various fashion houses Kwana took the leap of faith and decided to pursue her other dream of being a writer.
A longtime advocate for equality and diversity in romance and #WeNeedDiverseRomace, Kwana is a mother of twins and currently lives in a suburb of New York with her husband. When not writing she can be found on Twitter @kwanawrites, on Facebook at https://www.facebook.com/KmJacksonAuthor/ and on her website at http://www.kmjackson.com